You can see our currency news market reports, published daily, on this page. Jargon-free and with our archive back to 2011, bookmark this page to stay on top of the latest currency news relating to your transfers.

This morning’s Metro reported on the UK recession being likely to last longer than any other in the worldwide slowdown. Unemployment figures out this morning may show unemployment over 2 million for the first time since 1997.

All this is bad news for the Pound. Sending money overseas is likely to continue to become expensive as the UK reels from a constant flow of negative news.

If you do need to buy or sell currency, speak to a currency broker to make sure you don’t lose out.

After last week’s fall in the value of sterling, this week some important figures which could make it a week of volatility for exchange rates.

Tuesday morning’s UK house price index and German economic sentiment numbers may both have an effect on the best Euro exchange rates. A larger than expected drop in UK house prices would not be good news for the struggling Pound, while conversely we might see German business confidence taking a knock which would be likely to make the Euro slightly cheaper.

On Wednesday, the minutes from the Bank of England’s monetary policy committee meeting are released, with notes on the state of the economy and the UK’s trial of quantitative easing. Volatility is probable, specially as unemployment data is released at the same time.

For anyone needing to send money to Canada or the USA, Thursday brings Canadian inflation data at 11am, followed by US employment data at 12.30 and manufacturing data at 2pm. There is also US data on Tuesday and Wednesday lunchtimes which will be of interest to anyone wiring funds to the USA.

Any individuals or businesses sending money abroad would be well advised to contact a specialist currency broker to keep an eye on the relevant rates this week. The fragility of the Pound is likely to last for some time, but there are still opportunities to secure reasonable rates for buyers and sellers in the know.

UK manufacturing data out this morning was poor, which weighs on the Pound, while German data out at lunch time was more positive, making the Euro more expensive.

Tomorrow’s UK trade balance figures should give a clue as to the next movement – keep in touch with your currency broker if you have any requirments. Don’t assume the exchange rate will improve – it could be an expensive mistake.

Monday has started with the Pound in sharp decline following a wave of uncertainty on the markets amidst speculation that the banking sector has more bad news to come.

If you need to send money abroad, speak to your currency broker today.

Of course, if you have money to bring back to the UK, now could be a great time to secure exchange rates in advance.

1.30pm today sees the release of key monthly employment data in the USA – “non-farm payrolls”. This is an estimate of the number of workers in the US drawing a salary, excluding seasonal industries like farming.

It is not unusual for the figures to be wildly different to expectations, which can cause volatility in the US dollar exchange rate. Those of you looking to either buy American dollars, or even to bring Dollars back to the UK, would be well advised to look at rates this afternoon as there may be opportunities to buy.

A reputable foreign exchange broker will of course be able to provide help for your specific circumstances.

While the economy is going from bad to worse there always seems to be new buzz words that have not been mentioned for many years. We had parity, which has become used all over the finance world as GBP/EUR was getting close to 1 for 1, even sport commentators were using it.

The current buzz word, which probably won’t make it into sports is quantitative easing, here are a few questions and answers;

How much are they putting into the economy?
Initially they will be adding £75billion over the three months, but this could potentially rise to £150billion if the first attempt doesn’t work.

What are the pros?
The Bank can buy gilts, which are very secure, or invest in shares. Buying gilts is, in effect, lending the government money.

What are the cons?
It decreases the value of money, you need more to buy something.

Why do it?
It can lower interest rates, which encourages spending.

Can’t we just cut rates?
Interest rates cannot fall below zero per cent. Despite months of cuts, banks are still not lending.

Is money actually printed?
Most money in circulation never actually gets printed. When you buy large items, numbers just get transferred between accounts.

Won’t the Bank just buy more bad debt?
No. It will buy government gilts and private IOUs in companies with the best credit ratings.

Who else has done this?
Zimbabwe has been doing it for years, to disastrous effect, to pay government bills. Germany did the same thing in the 1920s. Japan did it in 2005 and it helped end their 15 year recession. The US started in November.

Will Europe follow suit?
Unlikely. Countries with the Euro will probably not all agree on it.

If you would like any more guidance regarding quantitative easing and the effect on the currency market, call one of our experienced brokers today on 0800 043 2623.

Speculation is rife that we will see the exchange of letters between Mervyn King and the Chancellor today at midday, relating to the Government’s plans for quantitative easing (injection of funds into the economy).

The effect on exchange rates is not yet known, although US Dollar exchange rates have worsened significantly this morning. Check back on this blog later today to find out the latest currency news.

A Busy Day on the Markets

A potentially busy day on the markets today, depending on how much has been priced in by the traders. The day starts with the European Monetary Union announcing the change in Gross Domestic Product on Quarter on Quarter and Year on Year, both are reportedly predicted to be a drop, giving early strength to Sterling and US Dollar.

The strength may not last depending on how likely the Bank of England are to halve interest rates down to 0.5%. There is a positive consensus that a reduction to 0.5% will happen, which could be priced into the market already. Following on from that is the European Central Bank possibly reducing their interest rate to 1.5% from 2.0%. If they decide to only reduce the interest rate by 0.25% expect to see Euro strength early on after 12:45 while everyone waits to hear Trichet’s speech at 13:30.

If you need any guidance regarding interest rate decisions contact any of our senior brokers today on 0800 043 2623. Exchange rate for buying Euros are likely to be volatile from midday onwards. 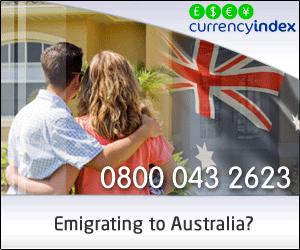 In a positive move for Australia, the Reserve Bank of Australia has frozen interest rates at 3.25% causing strength for the Australian Dollar against all major currencies.

Prior to the announcement GBP/AUD was trading at about 2.232, but since the positive news it was dropped to around 2.191.

There is no major news released today to effect cable against any of the major currencies. The Bank of Canada will be announcing their interest rate decision at 14:00 GMT, many believe the rate will be halved from 1.0% down to 0.5%, but this was also the consensus with the Australian Dollar as well.

If you would like to find out how you can be protected against adverse rate changes and assistance on when to buy your currency, contact one of our senior brokers today on 0800 043 2623 who will be able to explain you through the process. So if you are sending money to Australia or need to starting sending money to Canada contact us today and our foreign currency exchange specialists will be able to explain how it works.

Another day, another bank needing extra funding. Today HSBC announced they are looking to raise £12.5bn from shareholders through rights issue in the UK.

This was announced after HSBC revealed pre tax profits for 2008 of £6.5bn. Unfortunately for the London stock market this was down 62% on the previous year. HSBC are looking at reducing their presence in North America after they recorded a $15.5bn loss, mainly due to the US sub-prime market.

Just when everyone thought HSBC had finished they announced 6,100 job cuts in America as well.

The European Monetary Union announced an improvement in the Consumer Price Index from 1.1% up to 1.2%. The earlier consensus was a slight drop between 0.9%-1.0% so an early rally for the Euro this morning against Sterling.

Both the Bank of England and the European Central Bank are predicted to lower their rates to 0.5% and 1.5% respectively.

If you are looking at sending money overseas in the near future and need some guidance, speak to one of our brokers today on 0800 043 2623. They will be able explain how it works and how we could potentially save you up to 4% against most high street banks.